Melek Taus - The Peacock God of the Yazid 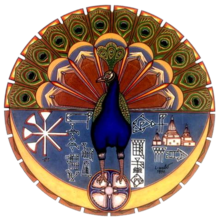 Melek Taus, the "Peacock Angel", is the god of the Yazidis.

The Yazidis consider Tawûsê Melek an emanation of God and a benevolent angel who has redeemed himself from his fall and has become a demiurge who created the cosmos frothe Cosmic Egg. After he repented, he wept for 7000 years, his tears filling seven jars, which then quenched the fires of Hell.

Melek was borrowed from the Arabic term "king" or "angel". In Hebrew, Melekh is King, and Malakh is Angel. Tawus is uncontroversially translated "peacock"; in art and sculpture, Melek Taus is depicted as peacock. However, peacocks are not native to the lands where he is worshipped.

The Yazidi believe that the founder of their religion, Sheikh Adi Ibn Musafir, was an avatar of Melek Taus.

Some people identify Melek Taus as Lucifer, or Satan. The Yazidis do not utter such blasphemy, as it is quite offensive to them to equate Melek Taus with evil. He is an Angel and this is how the Yazidis see him.

In the Islamic scheme of things, he is called Iblis or Eblis (the Calumniator or the Liar), and is considered to be the Prince of Darkness, himself. Azazel, by whatever name he might be called, is also often characterized as a 'Sovereign of the World' - kabalistically being a reflection in the Kingdom of Malkuth, of God in Kether.

In African Islamic traditions, he is known as Zeraili, the angel of death. The thorny acacia bush is sacred to Azazel, according to Arab tribes. His name is pre-Jewish and pre-Islamic. Some speculate that he may have been an early Semitic goat god whose worship later became repulsive to the Jewish and Islamic faiths. Angra Mainyu is Azazel's Zoroastrian counterpart. Andrew Collins, of "From the Ashes of Angels" fame, postulates that Azazel was most likely a powerful goat-shaman.

Whatever he was, he was the Master of Metals and Minerals. In "Genesis of the Grail Kings", Laurence Gardner says this: "It is said in Enoch that Azazel made known to men 'all the metals and the art of working them...and the use of antimony' (otherwise known as stibium [Sb] Element No. 51).

This is an essential ingredient of the preparatory alchemical process when producing the Philosopher's Stone. In the ancient Arab world antimony was called kuhl (or kohl). The related word, 'alcohol' stems from the Arabic al-kuhul, the highly refined Philosophical Mercury prepared from spirits of wine rectified over antimony" [which is, btw, extremely poisonous and related to arsenic].

According to Sir Roger Bacon, when processed in vitriol (a potent cocktail
of Alum, Ammonium Chloride, Sodium Nitrate or saltpetre, and a few
other choice materials) the antimony - a white to silver coloured ore - will be reduced to a 'noble red oil'. "Yes, many say, that when one prepares Stibium to a glass, then the evil volatile Sulphur will be gone, and the Oil, which may be prepared from the glass, would be a very fixed oil, and would then truly give an ingress and Medicine of imperfect metals to perfection."

Thus, the colour red is associated with Azazel as the Master of this most critical alchemical element.. According to traditions in the Middle East, the clay of the earth is red and from it was made man. As the Sovereign of the World of Man, red is again associated with him.

It is interesting that Enoch notes the use of antimony for the purposes of 'beautifying the eyelids', when this sulphide clearly has much more important uses and properties. It is as if we were left a clue that Azazel was an alchemist by the mere mention of the fact that part of his mastery was over this particular element. Metallurgy is also related to alchemy in that many metals and metallic salts are used in these most ancient arts.

The alchemist must forge his gold from basal leads in fire, the same as a smith who produces weapons, goblets, bowls, shields, mirrors and jewellery from ores. Azazel has also been identified with Tubal-Cain, Vulcan, and Thoth due to his mastery of metals and great knowledge.

Antimony is one of these basal leads alchemists use and is often referred to as the White Lead.One of The alchemical symbols for antimony are: 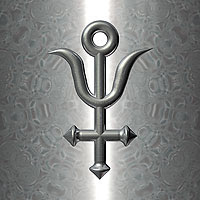 These and other alchemical symbols are painted on his robe.

The following is the Melek Taus legend from "From the Ashes of Angels":

"Yet chief among the Yezidi angels was a unique and very important figure
indeed. His name was, and still is (for the Yezidis still exist), Melek Taus,
the Peacock Angel. He corresponds with the Judeo-Christian concept of
the Evil One - Satan or Lucifer - but this association hardly does him justice, for Melek Taus is seen as a supreme being, with authority over worldly affairs.

To these people he was the creator of the material world, which he made from the scattered pieces of an original cosmic egg, or pearl, inside which his spirit had previously resided.

"According to one Yezidi text known as the Mes'haf i Resh, or 'the Black Book'- the contents of which were entirely unknown to Europeans in Layard's time -it reveals that:

In the beginning God (Kurdish Khuda) created the White Pearl out of his
most precious Essence; and He created a bird named Anfar. And He placed the pearl upon its back, and dwelt thereon forty thousand years. On the first day [of creation], Sunday, He created an angel called Azazil, which is MelekTaus, the chief of all [angels]." ~ pg. 170 'The Peacock Angel'. 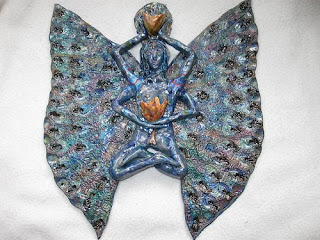 Here below we see some symbols in Cuneiform.
Please look at the first picture of Melek Taus, at the beginning of this topic and see the symbol on the left hand of the picture.
The symbol is the number 2 beloe, in Archaic Cuneiform style, dating 2,500 B.C. and means God, Heaven. (Note that it looks more like a brightness, a star). 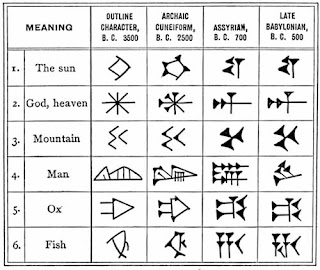 Do what thou wilt shall be the whole of the Law.

Great work, thank you for sharing, picked up some very useful information.

Love is the law, love under will.

Thank you Ish!
Glad to help!

No you cannot know God he has remove all knowledge from the caucasian race,you cannot be Created by God you have worshipped to many other god,only the dark race was a Creation by God and His Blood flows in us,you cannot will not accept the truth,it is in you not too for reason God only knows but caucasians are doomed from the very start its in your Bible you wrote it,You cannot go to Heaven,you take God and his word and use it decietfully you make good abd,and the bad good No caucasian will not be in Heaven,not worshipping a light ,earth,fatility and many more gods you are the Satan that is talk about in the wilderness the beast that was lifted up that you caucasians,sorry that is your roll,you`ve killed murdered stolen for this early possession and have you heaven right here on earth you deserved it know own up to it

From what translation is the Meshaf Resh from? It is a bit different than the one by Isya Joseph from 1919.

I find it extremely interesting that the truth of wheat - distending the belly - comes out in something so old.

They will met on the mountain of the LORD, the final battle.

What you quoted in blue, there are several books of that title, who is the author? Thanks

I sleep fine, must suck to have a history of failure....

I thought royal blue or peacock blue was the colour of Melek Taus, not red. The Yazidis will not wear blue for being a sacred colour of the Peacock God.

Red is most definitely Azazel.
Rick

What do you mean history of failures? You may want to travel and do more history ...and you both are wrong